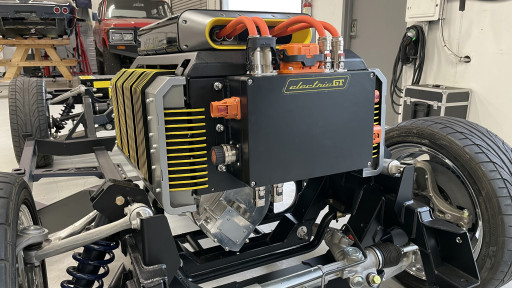 
Electric GT, LLC , known for its modular turnkey EV Crate Motor Swap Systems, will have a dominating EV aftermarket presence at SEMA 2022 with a strong showing of its eGT-413 V8 EV Crate Motor Swap System and the eGT-913 Porsche 911 specific EV conversion system. EGT-equipped Classic Sports Cars, SUVs and Offroad Vehicles will all be on display spread throughout the show, demonstrating broad application of its systems.

Electric GT has doubled its footprint and will have an eGT-413 equipped 1984 Jeep Scrambler on display alongside a fully functional eGT413 System, as well as an eGT-913-equipped black 1986 Porsche 911 presented by Analog Motor Co. A fully functional eGT-913 will also be on display next to the 911. Electric GT's base of operations at SEMA is Booth 23683 - Performance & Racing Hall, Hot Rod Alley. The eGT-413 & 913 Systems will be on display in Electric GT's booth in crate form for buyers to see the high image OilStain Lab-influenced end product.

Barrett Jackson phenom, KTL Restorations, will be unveiling a new and exciting custom build featuring an eGT-413 integration with a Roadster Shop chassis platform on Nov. 1 at 3 p.m. in Booth 11268 at SEMA Electrified in the North Hall. Tremec, the company synonymous with high-performance transmissions, will have a stunning eGT-413-powered 5 Speed manual 1963 split-window Corvette that is fully restored by legendary classic Chevy specialists D & P Classics inside the Main Hall Lobby front doors at Booth 20057. Tremec will also have an eGT-413-propelled Land Rover Defender 90 at its trailer in the Race Paddock adjacent to the West and North Halls, just south of the eBay Motors experience (Booth 81280). The eGT-413 System, like all of Electric GT's offerings, are fully engineered, tested and developed for aftermarket application and are now shipping to dealers, installers, and qualified DIY builders.

The eGT-413 V8 electric crate motor swap system is designed to fit, literally, millions of vehicles thanks to a comprehensive modular design that has provisions for versatile installation of the 'motor block' and a modular battery system. Having a multitude of power and range combinations that are modular and ready for a fab and fit installation is critical for aftermarket applications. This system made its most recent debut on the cover of the September 2022 edition of SEMA News in a stunning Land Rover D110 conversion commissioned by Himalaya.

The eGT-413 is Electric GT's flagship EV "V8" replacement conversion system and pairs well with domestic and import chassis dating from the early 1900s through the early 2000s. It easily fits within the footprint of LS-equipped internal combustion engine (ICE) vehicles and can be adapted to traditional transmissions or utilized as a direct-drive propulsion system. It delivers 406 lbs./ft of torque and 275 eHP at 6,500 RPM from a 750V/500A EV system. The "motor block" includes an integrated battery, so that builders can achieve near OEM weights and weight distribution in a vehicle chassis with proper placement of the all battery modules. Learn more about the eGT-413 e-crate EV conversion system here.

About Electric GT
Electric GT designs, engineers and manufactures bolt-in, turnkey Battery Electric Vehicle powertrain replacement systems for ICE 4-, 6- and 8-cylinder vehicles. Electric GT's systems integrate complete EV ecosystems to ensure a trouble-free conversion experience. Our EV conversion packages blend unmatched aesthetics with the performance you desire so you can repower the past with today's technology, and experience the ultimate in modern classic driving pleasure. One look under the hood, one time in the seat, and one step on the accelerator pedal, and you'll understand what it means to be Powered by Electric GT.